A local nature reserve is a protected area of land designated by the local authority because of its local special natural interest and educational value.

Local nature reserves can be all sorts of places - woodlands, wetlands, meadows or coastal sand dunes. They provide wild spaces where plants and animals, both common and rare, can thrive. They offer a natural environment, in contrast with formal open green spaces such as parks and gardens, but are still readily accessible to people. They can be found near city centres, on the coast, or in the countryside.

There are two local nature reserves in Aberdeenshire, as well as numerous local nature conservation sites. On this page you can find out more about these sites:

More information on local nature reserves can be found on NatureScot.

Our Ranger Service also hold events at the reserves. 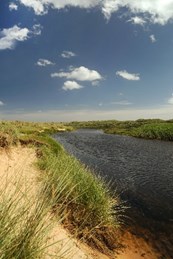 The reserve incorporates the estuary of the River Philorth and the sand dune complex, which is part of the larger Fraserburgh Bay sand dune system. There are also areas of reed bed, salt marsh and mud flats associated with the estuary. The Waters of Philorth site is known for the diversity of its bird life resulting from the range of habitats.

The exposed beach and its associated debris are popular areas for gulls while upstream the river is an important feeding site for many
migrating birds, especially waders and wildfowl such as oystercatcher, redshank, and dunlin. The reed beds that line the river further upstream provide shelter and food for birds such as reed bunting and sedge warbler.

Away from the exposed beach the sand dunes are more sheltered and contain a great variety of plants. As well as marram grass there are flowering plants such as ladies bedstraw, northern marsh orchid and cowslip.

A car park area with picnic facilities has been established at the landward side of the dunes and a boardwalk and footpaths provide access around the site. The site boundaries are the B9033, the golf course, the seaward edge of the dune and the Water of Philorth.

The local nature reserve can be visited at any time. Vehicular access is from the B9033 Fraserburgh to Inverallochy road along a small surfaced track to the car park area. Pedestrian access is available along the beach from Fraserburgh and along the coast from Cairnbulg to the east.

Arnhall Moss local nature reserve lies on the edge of the expanding settlements of Westhill and Elrick. 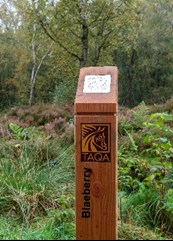 It was designated a local nature reserve in 1991 because of its value as a wildlife habitat. The site is part of a former lowland raised bog and is home to a range of plants and animals.

Over the past years birch trees have colonised Arnhall Moss and begun to dry out the bog area. This new birch woodland supports a range of insects and birds making the reserve a spectacular place to visit with much wildlife to see. Common woodland and wetland birds such as wren, great tit, blue tit, coal tit, redpoll, mallard and moorhen are abundant and mammals such as pipistrelle bats, roe deer, foxes and stoats, who either live on or use the site.

The local community formed an advisory group and together with the council have been actively working in the reserve to improve the area for wildlife and visitors.

Over the past years a number of successful events, such as Bat and Moth nights, Beastie Safaris and bird box building have been held and the paths around the site have been upgraded with a discovery trail added.

The local nature reserve can be visited at any time. Access is taken from Denman Park, opposite the shopping centre at Westhill and also from the A949 via a new footpath link.

View the Arnhall Moss management plan 2020-2024 (PDF 2MB) which details actions to be carried out on the site.

For further information on Arnhall Moss or to get involved in the Advisory Group contact garioch.ranger@aberdeenshire.gov.uk.

Portlethen Moss is a local nature conservation site. It is located on the edge of the town and represents the last remaining part of a much larger area of Moss, a lot of which has been lost to development.

The Portlethen Moss Conservation Group was formed in 2004 and has worked tirelessly to promote the protection, enhancement and use of the area for amenity, recreation and education, while being in the interests of biodiversity. With the support of the council who own some of the land on the approach to the main area of raised bog, and with funding from NatureScot and private sponsors, paths have been improved, landscaping and tree plantings have been carried out and interpretation boards have been erected.

Insch Meadows is a locally important natural open space within Insch. It is managed with the active involvement of a dedicated group of local volunteers. The Meadows has a variety of different areas for wildlife including a small pond, open meadow areas, trees and shrubs. There is also a small play area.

View the Insch Meadows management plan 2020-2024 (PDF 752KB) which details actions to be carried out on the site.